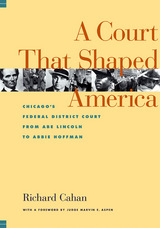 Judge Marvin Aspen is the Edward Avery Harriman Adjunct Professor of Law at the Northwestern University School of Law and a former chief judge for the Northern District of Illinois.
REVIEWS
"A Court That Shaped America is an extraordinary history of an institution that has reflected the interaction of our justice and cultural systems. An exciting read, it demolishes the notion that books about courts tell only the stories of anonymous, black-robed men and women who hear lawyers drone on." --James R. Thompson, former governor of Illinois


"So much of the history of Chicago in the later part of the century was determined by this court, whether in criminal or civil cases. It is the throbbing conscience of Chicago." --Scott Turow


"Cahan's book is well written and engaging. It gives a human face to a court that has a big impact on the lives of people in Chicago and its environs and will, I predict, be fascinating outside as well as within the legal community." --Judge Richard A. Posner of the Court of Appeals for the Seventh Circuit