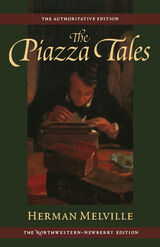 In this new edition of The Piazza Tales, the editors of the acclaimed Northwestern-Newberry Edition of the Writings of Herman Melville have used the original magazine versions for five of the six stories in order to present the most accurate tests of these works. Here, in such famous stories as "Bartleby, the Scrivener" and "The Encantadas, or Enchanted Isles," we find Melville's imagination and style at its best. Of the less well-known tales, the humor in "The Piazza" and "The Lightning-Rod Man," and the gothic horror of "The Bell Tower," command attention as well. Whether in the exotic Galapagos or the more familiar climes of Wall Street or a Massachusetts farmhouse, Melville's power and imagination transport the reader into his unique worlds.

This edition is an Approved Text of the Center for Editions of American Authors (Modern Language Association of America).
AUTHOR BIOGRAPHY
Herman Melville (August 1, 1819 – September 28, 1891) was an American novelist, short story writer, essayist, and poet. He is best known for his novel Moby-Dick. His first three books gained much contemporary attention (the first, Typee, becoming a bestseller), and after a fast-blooming literary success in the late 1840s, his popularity declined precipitously in the mid-1850s and never recovered during his lifetime. When he died in 1891, he was almost completely forgotten. It was not until the "Melville Revival" in the early 20th century that his work won recognition, especially Moby-Dick, which was hailed as one of the literary masterpieces of both American and world literature. He was the first writer to have his works collected and published by the Library of America.
REQUEST ACCESSIBLE FILE