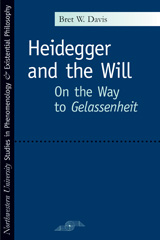 The problem of the will has long been viewed as central to Heidegger's later thought. In the first book to focus on this problem, Bret W. Davis clarifies key issues from the philosopher's later period--particularly his critique of the culmination of the history of metaphysics in the technological "will to will" and the possibility of Gelassenheit or "releasement" from this willful way of being in the world--but also shows that the question of will is at the very heart of Heidegger's thinking, a pivotal issue in his path from Being and Time (1926) to "Time and Being" (1962).

Moreover, the book demonstrates why popular critical interpretations of Heidegger's relation to the will are untenable, how his so-called "turn" is not a simple "turnaround" from voluntarism to passivism. Davis explains why the later Heidegger's key notions of "non-willing" and "Gelassenheit" do not imply a mere abandonment of human action; rather, they are signposts in a search for an other way of being, a "higher activity" beyond the horizon of the will. While elucidating this search, his work also provides a critical look at the ambiguities, tensions, and inconsistencies of Heidegger's project, and does so in a way that allows us to follow the inner logic of the philosopher's struggles. As meticulous as it is bold, this comprehensive reinterpretation will change the way we think about Heidegger's politics and about the thrust of his philosophy as a whole.
AUTHOR BIOGRAPHY
Bret W. Davis is assistant professor of philosophy at Loyola College in Maryland.
REVIEWS

"In this monumental study Bret Davis shows that the often neglected problem of the will and of the possibility of non-willing is in fact a crucial guiding thread that runs throughout Heidegger's thought. Davis' interpretations are nuanced and well-focused. His command of the intricacies of Heidegger's texts is impressive. Even more impressive is the facility with which he draws out what is central to those texts." --John Sallis, Frederick J. Adelmann Professor of Philosophy, Boston College

"Bret Davis' Heidegger and the Will: On the Way to Gelassenheit is a thoroughgoing reassessment of Heidegger's entire path of thought, and the definitive work on Heidegger's treatment of the problem of the Will, casting new light on his political misadventure. With this book Bret Davis establishes himself as one of the most brilliant and original of a new generation of Heidegger scholars." --David Wood, Department of Philosophy, Vanderbilt University


Contents
Prologue: On Gelassenheit and Heidegger's Path of Thought
Chapter One: The Will, Non-Willing, and the Domain of the Will: Preliminary Determinations
Chapter Two: The Ambiguous Role of the Will in Being and Time
Chapter Three: The Turn Through an Embrace of the Will
Chapter Four: A Radically Ambivalent Onto-Theodicy of Primal Willing: On Heidegger's Interpretations of Schelling
Chapter Five: The Mature Critique of the Will
Chapter Six: Releasement to and from God's Will: Excursus on Meister Eckhart after Heidegger
Chapter Seven: Twisting Free of the Domain of the Will: On the Way to an Other Beginning of Non-Willing
Chapter Eight: Intimations of Being in the Region of Non-Willing
Chapter Nine: Residues of Will in Heidegger's Thought
Chapter Ten: The Persistence of Ur-Willing, the Dissonant Excess of Evil, and the Enigma of Human Freedom