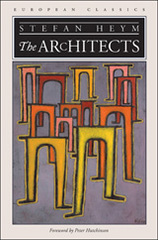 Written between 1963 and 1966, when its publication would have proved to be political dynamite-and its author's undoing-this novel of political intrigue and personal betrayal takes readers into the German Democratic Republic in the late 1950s, shortly after Khruschev's "secret speech" denouncing Stalin and his methods brought about a "thaw" in the Soviet bloc and, with it, the release of many victims of Stalinist brutality. Among these is Daniel, a Communist exile from Hitler who has been accused of treachery while in Moscow and who now returns to Germany after years of imprisonment. A brilliant architect, he is taken on by his former colleague, Arnold Sundstrom, who was in exile in Moscow as well but somehow fared better. He is now in fact the chief architect for the World Peace Road being built by the GDR. In Daniel, Arnold's young wife Julia finds the key that will unlock the dark secret of her husband's success and of her own parents' deaths in Moscow-and will undermine the very foundation on which she has built her life. A novel of exquisite suspense, romance, and drama, The Architects is also a window on a harrowing period of history that its author experienced firsthand-and that readers would do well to remember today.
AUTHOR BIOGRAPHY
Stefan Heym (1913-2001) was the author of more than a dozen novels. After escaping the Nazis, joining the United States Army, and obtaining U.S. citizenship, he returned to East Germany in the 1950s. His novels The King David Report (1997) and The Wandering Jew (1999) are also published by Northwestern University Press.

"Fiction on this subject could only be attempted by someone whose desire for truth was absolute and who could publish his work in another country and another language. In the 1950s there was only one writer in the German Demorcratic Republic who was in this position." -Peter Hutchinson, from the foreword