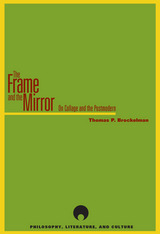 If the postmodern is a collage—as some critics have suggested—or if collage is itself a kernel of the postmodern, what does this mean for our way of understanding the world? The Frame and the Mirror uses this question to probe the distinctive character of the postmodern situation and the philosophical problem of representation. Brockelman’s work is itself a collage of sorts, using juxtapositions of critics and art historical figures to conduct a debate between such figures as Karsten Harries, Gianni Vattimo, Rosalind Krauss, Immanuel Kant, Jean-Francois Lyotard, Slavo Žižek, and Le Corbusier about issues such as truth in art, perspectivism, theatricality, the sublime, psychoanalytic theory, politics, and urbanism.

More than an introduction to the postmodern, The Frame and the Mirror advances our understanding of the contemporary world by relating its features to the peculiar characteristics of collage. Ultimately, Brockelman shows how collage demands that we reinterpret modernity, conceiving of it as suspended between a loss of certainty and a new kind of knowledge about the human condition. In doing so, his work challenges many of the claims made in the name of postmodernism—and offers in their place a new and ironic view of the cultural space in which contemporary and historical events occur.
AUTHOR BIOGRAPHY
THOMAS BROCKELMAN is an assistant professor at Le Moyne College and a lecturer in architecture at Syracuse University.
TABLE OF CONTENTS


List of Illustrations
Acknowledgments
Introduction: Collage and the Postmodern

Part 1. Frame: The Truth in Collage
1. Breaking the Frame of Truth: Karsten Harries and the Truth of Art
2. Everything Goes: Collage and Perspectivism in Vattimo and Schwitters
3. The Place of Truth: Theatricality and Modernity in Krauss and Greenaway

Part 2. Mirror: The Crisis of Modern "Self"-Experience
4. Kant and Collage: Judgments, Avant-Gardism, and the Sublime
5. Posthumanism and the Postmodern in Contemporary Psychoanalytic Theory

Part 3. The Agony of Utopia
6. Utopia, the City, and the Limits of Collage