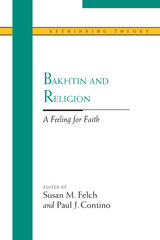 The dimension of religion in the life and work of Bakhtin has been fiercely contested--and willfully ignored--by critics. Unique in its in-depth focus on this subject, Bakhtin and Religion brings together leading British, American, and Russian scholars to investigate the role of religious thought in shaping and framing Bakhtin's writings.

These essays provide an overview of Bakhtin's attitude toward religion in general and Russian Orthodoxy in particular, addressing topics ranging from how Bakhtin's religious ideas informed his linguistic and aesthetic theories to the idea of love in his secular and religious thought and to the religious component of Bakhtin's theory of laughter.
AUTHOR BIOGRAPHY
Susan M. Felch is an associate professor of English at Calvin College in Grand Rapids, Michigan.

Paul J. Contino is an associate professor of humanities at Christ College, Valparaiso University. His work has appeared in the journals Studies in the Novel, Renascence, and Religion and Literature.
TABLE OF CONTENTS

Alan Jacobs
Bakhtin and the Hermeneutics of Love

Charles Lock
Bakhtin and the Tropes of Orthodoxy

Randall A. Poole
The Apophatic Bakhtin

Caryl Emerson
Afterword: Plenitude as a Form of Hope