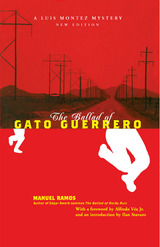 Northwestern University Press, 2003
Paper: 978-0-8101-2091-4
Luis Montez-Denver attorney and part-time detective-has been getting his career and his life together. So how did he end up in a ditch, his car twisted and smoking nearby, a gun-wielding giant in a cowboy hat coming toward him?

Trouble has always followed the larger-than-life Felix the Cat. Now it has jumped all over him. His girlfriend is the wife of a ruthless local crime lord and in spite of bullets and hit men he won't give her up. His former father-in-law blames him for a family tragedy and is bent on revenge. Worst of all, Felix is determined to remain unaware of the dangers. It's up to Montez-and not for the first time-to step in and save him.

The Ballad of Gato Guerrero