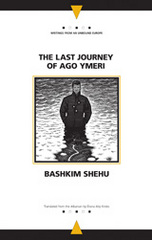 In a remote Albanian village, a place of banishment, a stranger appears, claiming to be Viktor Dragoti and looking for his long-lost love. That Viktor Dragoti has been dead for nine years, killed by the Albanian coast guard while trying to swim to freedom, only adds to the stranger's mystery--and to the suspense of this curiously real and yet otherworldly work by one of Albania's most distinguished writers. With echoes of The Return of Martin Guerre and Kafka's The Trial, with allusions to The Odyssey and the Albanian folktale of Ago Ymeri, a legendary hero released from the underworld for one day, Shehu's novel blends the autobiographical and the historical, the personal and the political into a powerful tale--a story that conveys the terrors, small and large, of a totalitarian state while capturing all that is surreal and even lyrical in life in such a deeply distorted world.
AUTHOR BIOGRAPHY
Born in Tirana, Albania, in 1955, Bashkim Shehu is known for his essays "L'Automne de la peur" ("Autumn of Fear"), an account of the last months of the life of his father, Mehmet Shehu, the second-in-command in the communist regime during the years of Enver Hoxha. His position in favor of democracy earned him a lengthy imprisonment. Shehu now serves as a representative to the International Parliament of Writers and has lived in Barcelona, Spain since 1997 as part of the Asylum City program. His books have been translated into French, Italian, Spanish, and Catalan.

Diana Alqi Kristo was born and raised in Tirana, Albania. She worked as professor of text analysis, translation, and interpreting at the Faculty of Foreign Languages, Tirana University for eighteen years. She now lives with her husband and two sons in Boston, Massachusetts and works as a freelance translator and interpreter for numerous international organizations.
TABLE OF CONTENTS
THE LAST JOURNEYOF AGO YMERI
CHAPTER ONE
CHAPTER TWO
C HAPTER THREE
CHAPTER FOUR
CHAPTER FIVE
CHAPTER SIX
CHAPTER SEVEN
CHAPTER EIGHT
CHAPTER NINE
ABOUT THE AUTHOR
WRITINGS FROM AN UNBOUND EUROPE
REQUEST ACCESSIBLE FILE