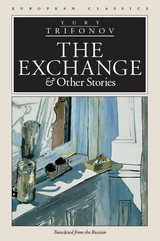 Yury Trifonov took a turn toward the controversial, and a leap toward greatness, with the publication of the two novellas included in this collection. "The Exchange" and "The Long Goodbye" depict the complex dilemmas and compromises of Russian life after World War II. These works, along with the short stories "Games at Dusk" and "A Short Stay in the Torture Chamber," detail the moral and spiritual decline in Russia that resulted from the growing distance between the theoretical idealism of the Soviet state and the actual materialism and careerism that increasingly marked society.
AUTHOR BIOGRAPHY
YURY TRIFONOV (1925–⁠1981) began publishing in 1947 and received a Stalin Prize for his novel Students in 1951. He wrote a number of well-received works but became an increasingly controversial figure with the publication of "The Exchange" (1969), "Taking Stock" (1970), and "The Long Goodbye" (1971). His works The Old Man, Disappearance, and Another Life and The House on the Embankment are published by Northwestern University Press.
REVIEWS

"I regard Trifonov as one of the most important prose writers of the post-World War II period in Russia. . . . I can think of no other writer who captures so fully what it meant to live through those years in Russia, and these tales are exemplary instances of his talent." --Barry P. Scherr, Dartmouth College