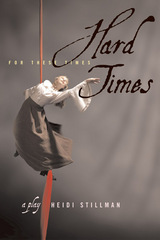 The citizens of Charles Dickens's Coketown have moved readers for over a century. Now, Heidi Stillman's stunning adaptation brings these iconic characters to life on the stage, revealing the universality of their hopes and suffering in their times and in ours. The world premiere of Hard Times was presented by the Lookingglass Theatre Company of Chicago in 2001. The Play won five Joseph Jefferson Awards, for best production of a play, best director, best adaptation, best choreography, and best lighting design.
AUTHOR BIOGRAPHY
HEIDI STILLMAN is a writer, director, and ensemble member of the Lookingglass Theatre Company in Chicago. Her adaptation credits include the Jeff-nominated The Baron in the Trees (with Larry DiStasi) and The Master and Margarita. She also performed in the acclaimed New York production of Metamorphoses and served as artistic director for Lookingglass from 1997 to 2000.
REVIEWS

"It's a tribute not only to the glory of Dickens, but to the joy of theater." --Richard Christiansen, Chicago Tribune

"Heidi Stilman--in her finest, most nuanced work as both adapter and director--has crafted a show of tremendous grace and heart, darkness and light. She has brought to life a Victorian-era epic that bursts with wit and whimsy, and all the outrage, hope, severity, and sentimentality of the novel." --Hedy Weiss, Chicago Sun-Times