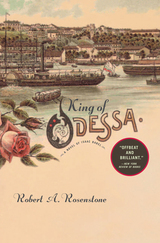 A celebrated writer returns to his hometown of Odessa, pondering a deal with the secret police, pining for a daughter living abroad, and hoping to pen one last homage to his own past. Isaac Babel, the world famous spinner of tales about Cossacks and gangsters, arrives in Odessa to be treated for asthma-and perhaps help a condemned prisoner to escape. Or is it Babel who intends to escape?

For six decades our only record of Babel's visit has been the contents of letters and postcards sent abroad to his mother and sister. In King of Odessa, Robert A. Rosenstone imagines a version of this visit and the novel Babel wrote during those weeks. Babel himself is concerned with more than literary plots as he considers an escape just as he starts an affair with an actress who may be a police spy. He also ruminates on his past-his childhood as a sickly Jewish boy, the horrifying 1905 pogrom, the famous rides with the Cossacks that inspired Red Calvary, and above all his complicated relationships with women. Throughout the novel Rosenstone captures Babel's lively wit, his exhaustion with fame and the Soviet system, and his infectious charm.

This would prove to be Babel's last visit to Odessa. Three years later, he was arrested as a spy and executed. Rosenstone, the acclaimed biographer of writer and activist John Reed, mixes historical facts and fiction with the talent of a gifted storyteller. The result is a captivating exploration of a great writer surrounded by history and on the brink of falling out of it forever.
AUTHOR BIOGRAPHY
Robert A. Rosenstone is a professor of history at the California Institute of Technology. His works include Romantic Revolutionary: A Biography of John Reed (Knopf, 1975), the basis for the film Reds; Visions of the Past: The Challenge of Film to Our Idea of History (Harvard, 1995); and Mirror in the Shrine (Harvard, 1988).