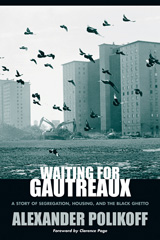 On his thirty-ninth birthday in 1966, Alexander Polikoff, a volunteer ACLU attorney and partner in a Chicago law firm, met some friends to discuss a pro bono case. Over lunch, the four talked about the Chicago Housing Authority construction program. All the new public housing, it seemed, was going into black neighborhoods. If discrimination was prohibited in public schools, wasn't it also prohibited in public housing?

And so began Gautreaux v. CHA and HUD, a case that from its rocky beginnings would roll on year after year, decade after decade, carrying Polikoff and his colleagues to the nation's Supreme Court (to face then-solicitor general Robert Bork); establishing precedents for suits against the discriminatory policies of local housing authorities, often abetted by HUD; and setting the stage for a nationwide experiment aimed at ending the concentration--and racialization--of poverty through public housing. Sometimes Kafkaesque, sometimes simply inspiring, and never less than absorbing, the story of Gautreaux, told by its principal lawyer, moves with ease through local and national civil rights history, legal details, political matters, and the personal costs--and rewards--of a commitment to fairness, equality, and justice. Both the memoir of a dedicated lawyer, and the narrative of a tenacious pursuit of equality, this story--itself a critical, still-unfolding chapter in recent American history--urges us to take an essential step in ending the racial inequality that Alexis de Toqueville prophetically named America's "most formidable evil."
AUTHOR BIOGRAPHY
Alexander Polikoff served for twenty-nine years as executive director of BPI, Business and Professional People for the Public Interest, a Chicago public interest law and policy center. He is the author of many articles on urban affairs and of Housing the Poor: The Case for Heroism.  Polikoff  is the recipient of a 2006 The American Lawyer Lifetime Achievement Award.  He lives in the Chicago area with his wife, a writer of fiction for young people, and continues to work at BPI.
REVIEWS

"This is an inspiring and fascinating book. The story of Alex Polikoff and his forty-year crusade to bring the constitutional promise of equality to public housing is dramatic evidence that lawyers--and the law--can still be a force for progress in the United States." --Scott Turow

"Somewhere along the way, we lost sight of the dream of integration. Not Alex Polikoff. In Waiting for Gautreaux he tells the compelling story of his personal quest for fairness and openness in housing. Both moving and informative this is history as it should be. Polikoff is a modern-day hero." --Alex Kotlowitz

"With the same thoroughness and tenacity he demonstrated in the lawsuit, Alex Polikoff traces the ups and downs of the Gautreaux litigation. If you want to understand the past, present, and future of public housing in this country, you need to read Waiting for Gautreaux." --Abner J. Mikva, Former Chief Judge, U.S. Court of Appeals for the D.C. Circuit