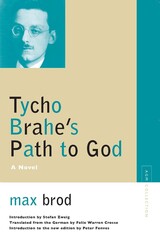 Northwestern University Press, 2007
Paper: 978-0-8101-2381-6
Though best known for his editing and posthumous publication of his friend Franz Kafka's writing, Max Brod was a major novelist in his own right. Tycho Brahe's Path to God, widely considered his finest work and viewed by many as a small masterpiece, concerns the relationship between the great Danish astronomer and the younger, intellectually superior Johannes Kepler. Brod's representation of this complicated relation grew out of his acquaintance with the young Albert Einstein, reproduces his struggles with the Expressionist poet Franz Werfel, and strangely anticipates the most famous act Brod would ever perform: publishing Kafka's writings without his permission. As Brahe attempts to create a diplomatic compromise between the old Ptolemaic system of planetary motion and its modern, Copernican revision, Kepler discards the principle of compromise root and branch. Their conflict thus becomes an emblem of the struggle between a weakened tradition and a self-conscious modernity. The novel manages to convey the intimate, emotional reality of a seventeenth-century political conflict as well as the psychological, political, and artistic turmoil of Brod's own time. This revival of the richly allusive and deeply resonant Tycho Brahe's Path to God is a true literary event.
AUTHOR BIOGRAPHY
Max Brod (1884-1968) was a Czech-born, German-language novelist, and a lifelong friend of Franz Kafka, whose major works he edited for publication after Kafka's death. His other works include the novels Three Loves (1927) and The Magical Realm of Love (1928), and Franz Kafka: A Biography (Da Capo Press, 1995).

Peter Fenves is the Joan and Sarepta Harrison Professor of Literature at Northwestern University. He is the author of several books including most recently Late Kant: Towards Another Law of the Earth (Routledge, 2003), and Arresting Language: From Leibniz to Benjamin (Stanford, 2001).
REQUEST ACCESSIBLE FILE