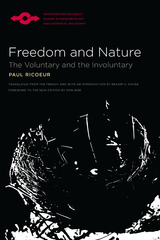 Freedom and Nature: The Voluntary and the Involuntary
by Paul Ricoeur
foreword by Don Ihde
translated by Erazim V. Kohak

Northwestern University Press, 2007
Paper: 978-0-8101-2398-4
This volume, the first part of Paul Ricoeur's Philosophy of the Will, is an eidetics, carried out within carefully imposed phenomenological brackets. It seeks to deal with the essential structure of man's being in the world, and so it suspends the distorting dimensions of existence, the bondage of passion, and the vision of innocence, to which Ricoeur returns in his later writings. The result is a conception of man as an incarnate Cogito, which can make the polar unity of subject and object intelligible and provide a basic continuity for the various aspects of inquiry into man's being-in-the-world.
AUTHOR BIOGRAPHY

PAUL RICOEUR (1913–2005) was a French philosopher best known for combining phenomenological description with hermeneutic interpretation. As such his thought is situated within the same tradition as other major hermeneutic phenomenologists, Martin Heidegger and Hans-Georg Gadamer.

ERAZIM V. KOHÁK is a professor emeritus of philosophy at Boston University.

DON IHDE is Distinguished Profssor of Philosophy at Stony Brook University.  He is the author of numerous books, including Postphenomenology: Essays in the Postmodern Context, published by Northwestern University Press.


Foreword to the New Edition
Translator's Introduction: The Philosophy of Paul Ricoeur

Part I. Decision: Choice and Its Motives
Chapter 1: Pure Description of "Deciding"
Chapter 2: Motivation and the Corporeal Involuntary
Chapter 3: History of Decision: From Heistation to Choice