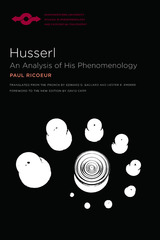 Husserl: An Analysis of His Phenomenology
by Paul Ricoeur, Edward G. Ballard and Lester E. Embree
foreword by David Carr
Northwestern University Press, 2007
Paper: 978-0-8101-2401-1
Paul Ricoeur was one of the foremost interpreters and translators of Edmund Husserl's philosophy. These nine essays present Ricoeur's interpretation of the most important of Husserl's writings, with emphasis on his philosophy of consciousness rather than his work in logic. In Ricoeur's philosophy, phenomenology and existentialism came of age and these essays provide an introduction to the Husserlian elements which most heavily influenced his own philosophical position.
AUTHOR BIOGRAPHY
PAUL RICOEUR (1913–2005) was a French philosopher best known for combining phenomenological description with hermeneutic interpretation. As such his thought is situated within the same tradition as other major hermeneutic phenomenologists, Martin Heidegger and Hans-Georg Gadamer.

EDWARD G. BALLARD (1910–1989) was a professor emeritus of philosophy at Tulane University.

DAVID CARR is the Charles Howard Candler professor of philosophy at Emory University.
TABLE OF CONTENTS