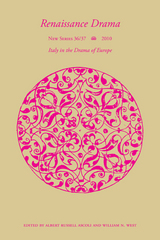 Renaissance Drama, an annual interdisciplinary publication, is devoted to drama and performance as a central feature of Renaissance culture. The essays in each volume explore traditional canons of drama, the significance of performance (broadly construed) to early modern culture, and the impact of new forms of interpretation on the study of Renaissance plays, theater, and performance.

This special issue of Renaissance Drama on "Italy in the Drama of Europe" primarily builds on the groundwork laid by Louise George Clubb, who showed that Italian drama was made in such a way as to facilitate its absorption and transformation into other traditions, even when it was not explicitly cited or referenced.

"Italy in the Drama of Europe" takes up the reverberations of early modern Italian drama in the theaters of Spain, England, and France and in writings in Italian, English, Spanish, French, Hebrew, Latin, and German. Its scope is an example of the continuing force of and interest in one of the most rewarding, wide-ranging, and productive early modern aesthetic modes, and a tribute to the scholarship of Louise George Clubb, who, among others, recalled our attention to it.

Albert Russell Ascoli is the Terrill Distinguished Professor in the department of Italian studies at the University of California, Berkeley. He is the author of Ariosto’s Bitter Harmony: Crisis and Evasion in the Italian Renaissance (1987) and Dante and the Making of a Modern Author (2008).

William N. West is an associate professor of English, classics, and comparative literary studies at Northwestern University. He is the author of Theatres and Encyclopedias in Early Modern Europe (2002). He is currently at work on a book called Understanding and Confusion in the Elizabethan Theaters and on a project that traces the history of the idea of the Renaissance as a period.