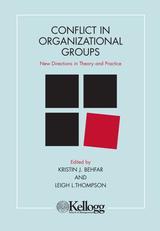 The chapters in this book were presented at a conference held at the Kellogg School of Management in June 2005 entitled Conflict in Organizational Groups: New Directions in Theory and Practice. The Kellogg Team and Group Research Center (KTAG) and the Kellogg School of Management cosponsored the conference. The goal of the conference was to bring together both junior and senior scholars from a variety of disciplines to discuss their newest ideas and current trends in group conflict research. The chapters in this book represent perspectives from the fields of business, political science, sociology, and psychology.

The idea to organize a conference about conflict in organizational groups arose from three interrelated and exciting opportunities for theory and practice--both the academic and business press have focused growing attention on the management challenges of organizational groups; the academic community has begun to integrate various disciplinary perspectives, as evidenced by a growing number of cross-disciplinary coauthorships and thematic conferences; and several statistical and methodological advances have allowed scholars to better model variables across levels of analysis.

Taken together, these three reasons inspired the assembling of the interdisciplinary mix of seasoned and newly minted authors who in this volume tackle important and complex questions about group conflict. Their chapters represent cutting-edge advances in theory, methodology, and challenges to dominant perspectives.

Leigh L. Thompson is J. Jay Gerber Distinguished Professor of Dispute Resolution & Organizations at the Kellogg School of Management, Northwestern University. She is the author of The Mind and Heart of the Negotiator and Making the Team: A Guide for Managers, as well as numerous research papers and book chapters.

Kristin J. Behfar is an assistant professor of organization and strategy at the Paul Merage School of Business, University of California, Irvine. Her publications have appeared in Organizational Behavior and Human Decision Processes and Organizational Research Methods.