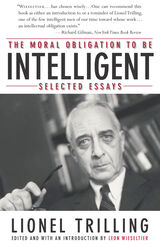 Bringing together the thoughts of one of American literature’s sharpest cultural critics, this compendium will open the eyes of a whole new audience to the work of Lionel Trilling. Trilling was a strenuous thinker who was proud to think “too much.” As an intellectual he did not spare his own kind, and though he did not consider himself a rationalist, he was grounded in the world.

This collection features 32 of Trilling’s essays on a range of topics, from Jane Austen to George Orwell and from the Kinsey Report to Lolita. Also included are Trilling’s seminal essays “Art and Neurosis” and “Manners, Morals, and the Novel.” Many of the pieces made their initial appearances in periodicals such as The Partisan Review and Commentary; most were later reprinted in essay collections. This new gathering of his writings demonstrates again Trilling’s patient, thorough style. Considering “the problems of life”—in art, literature, culture, and intellectual life—was, to him, a vital occupation, even if he did not expect to get anything as simple or encouraging as “answers.” The intellectual journey was the true goal.

No matter the subject, Trilling’s arguments come together easily, as if constructing complicated defenses and attacks were singularly simple for his well-honed mind. The more he wrote on a subject and the more intricate his reasoning, the more clear that subject became; his elaboration is all function and no filler. Wrestling with Trilling’s challenging work still yields rewards today, his ideas speaking to issues that transcend decades and even centuries.

Lionel Trilling (1905–75) is the author of the collections Beyond Culture, The Liberal Imagination, and the posthumously published Speaking of Literature and Society. He was a professor at Columbia University.

Leon Wieseltier is the editor of The New Republic and lives in New York City.

"Trilling constantly pits 'spontaneity, complexity, and variety' against the propensity to commiserate with, then condescend to, then coerce our peers."--Kirkus Reviews

"There was never just one thing, in [Trilling's] work. He was mentally indefatigable; there was order in his writing, but there was no repose."--Leon Wieseltier

The America of John Dos Passos
Hemingway and his Critics
T. S. Eliot's Politics
The Immortality Ode
Kipling
Reality in America
Art and Neurosis
Manners, Morals, and the Novel
The Kinsey Report
Huckleberry Finn
The Princess Casamassima
Wrdsworth and the Rabbis
William Dean Howells and the Roots of Modern Taste
The Poet as Hero: Keats in His Letters
George Orwell and the Politics of Truth
The Situation of the American Intellectual at the Present Time
Mansfield Park
Isaac Babel
The Morality of Inertia
"That Smile of Parmenides Made Me Think"
The Last Lover
A Speech on Robert Frost: A Cultural Episode
On the Teaching of Modern Literature
The Leavis-Snow Controversy
The Fate of Pleasure
James Joyce in His Letters
Mind in the Modern World
Art, Will, and Necessity
Why We Read Jane Austen