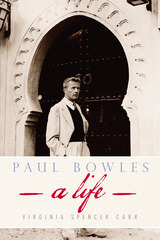 Paul Bowles: A Life
by Virginia Spencer Carr
Northwestern University Press, 2008
Paper: 978-0-8101-2525-4
Paul Bowles, best known for his classic 1949 novel, The Sheltering Sky, is one of the most compelling yet elusive figures of twentieth-century American counterculture. In this definitive biography, Virginia Spencer Carr has captured Bowles in his many guises: gifted composer, expatriate novelist, and gay icon, to name only a few.

Born in New York in 1910, Bowles' brilliance was evident from early childhood. His first artistic interest was music, which he studied with the composer Aaron Copland. Bowles wrote scores for films and countless plays, including pieces by Tennessee Williams and Orson Welles. Over the course of his life, his intellectual pursuits led him around the world. He cultivated a circle of artistic friends that included Gertrude Stein, W.H. Auden, Gore Vidal, Truman Capote, Allen Ginsburg, William Burroughs, Stephen Spender, and Carson McCullers.

Just as fascinating for his flamboyant personality as for his literary success, Bowles' leftist politics and experimentation with drugs make him an ever-controversial character. Carr delves into Bowles' unconventional marriage to Jane Auer and his self-exile in Morocco. Close friends with him before his death in 1999, Carr's first-hand knowledge of Bowles is undeniable. This book encompasses her personal experiences plus ten years of research and interviews with some two hundred of Bowles' acquaintances.

Virginia Spencer Carr has written a riveting biography that tells not only the story of Paul Bowles' literary genius, but also of a crucial period of redefinition in American culture. Carr is simultaneously entertaining and precise, delivering a wealth of information on one of the most mythologized figures of mid-century literature.
AUTHOR BIOGRAPHY

Virginia Spencer Carr is the acclaimed biographer of Carson McCullers and John Dos Passos. She holds the John B. and Elena Díaz-Versón Amos Distinguished Chair in English at Georgia State University. She lives in Atlanta.

"Carr deeply mines Bowles' childhood and early years as a spokesman for non-Western music; her account of his initial success as a novelist (The Sheltering Sky, inspired by Jane's writing) moves blithely and is chock-full of encounters with famous musicians and belletrists. . . Nonanalytical and nonjudgmental, very much the way Bowles would have wanted it."--Kirkus Reviews