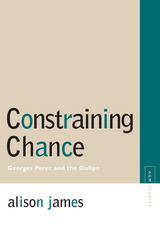 A token of the world’s instability and of human powerlessness, chance is inevitably a crucial literary theme. It also presents formal problems: Must the artist struggle against chance in pursuit of a flawless work? Or does chance have a place in the artistic process or product? This book examines the representation and staging of chance in literature through the study of a specific case—the work of the twentieth-century French writer Georges Perec (1936–82).

In Constraining Chance, James explores the ways in which Perec’s texts exploit the possibilities of chance, by both tapping into its creative potential and controlling its operation. These works, she demonstrates, strive to capture essential aspects of human life: its "considerable energy" (Perec’s phrase), its boundless possibilities, but also the constraints and limitations that bind it. A member of the Ouvroir de littérature potentielle (known as Oulipo), Perec adopted the group’s dictum that the literary work should be "anti-chance"—a product of fully conscious creative processes. James shows how Perec gave this notion a twist, using Oulipian precepts both to explore the role of chance in human existence and to redefine the possibilities of literary form. Thus the investigation of chance links Perec’s writing methods, which harness chance for creative purposes, to the thematic exploration of causality, chance, and fate in his writings.

Constraining Chance has received early praise from scholars in the field. Warren F. Motte calls it "an erudite, engaging, intellectually intrepid reflection on the ways in which one of the most powerful authors of the twentieth century grappled with the notion of chance. [James] writes with both elegance and authority, inviting us to see Georges Perec's work through a new lens, one where chance may be viewed as a positive potential, fully enlisted in the service of ‘intentional’ literature."

Alison James is an assistant professor of French literature at the University of Chicago.

Introduction
1 Mastering Hitsory
2 Questioning Destiny
3 Cause and Effect
4 Traps and Machinsations
5 A Challenge to Chance: The Poetics of the Oulipo
6 Perec's Constraints: Combination, Coincidence, Clinamen
7 Labyrinths and Puzzles
8 Ordering the Infraordinary