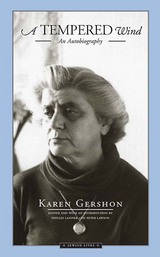 Poet Karen Gershon opens A Tempered Wind, the sequel to volume 1 of her autobiography A Lesser Child, in 1943. It begins tragically with the death of Karen’s sister Anne in England, where they had escaped from Nazi Germany with their third sister Lise via the Kindertransport mission. A Tempered Wind proceeds to chart the difficult period from 1939 to 1943 as Karen adapts to a new culture and undertakes the complicated passage from adolescence to adulthood in the British Isles.

Now orphans—their parents were murdered by the Nazis—the sisters are separated, and Karen is left haunted by feelings of abandonment by her sister as well as her parents who sent her away from them. Such feelings, along with her struggle with her imperiled Jewish identity, make their way into Karen’s writing, which includes stories, essays, and poems. In writing, she starts to find a home in language. Charting the creative growth of an astonishing Jewish author, A Tempered Wind concludes with Karen making her own urgent way as a writer with a mission to tell the world her archetypal German Jewish story.

Poet and writer KAREN GERSHON (1923–1993) was born Kaethe Loewenthal in Bielefeld, Westphalia, Germany. In 1948 she married a Gentile art teacher, Val Tripp. They had four children. In 1957, she assumed the nom de plume Karen Gershon, her father’s Hebrew name, meaning "stranger in a strange land." The Tripps emigrated to Israel in 1968, returning to Britain in 1973.

PHYLLIS LASSNER is a distinguished senior lecturer at Northwestern University, teaching courses in writing, Jewish studies, and gender studies. She is the author of two books on Elizabeth Bowen; British Women Writers of World War II; Colonial Strangers: Women Writing the End of the British Empire; and, in addition to articles on interwar and wartime women writers, Anglo-Jewish Women Writing the Holocaust.

PETER LAWSON is an associate lecturer at the Open University in London. He is the author of Anglo-Jewish Poetry from Isaac Rosenberg to Elaine Feinstein and the editor of a unique anthology of poems, Passionate Renewal: Jewish Poetry in Britain Since 1945. He has written widely on Holocaust literature, including Kindertransport poetry.