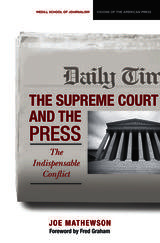 The Supreme Court and the Press: The Indispensable Conflict
by Joe Mathewson
foreword by Fred Graham
Northwestern University Press, 2011
Paper: 978-0-8101-2621-3
Although theirs has been a contentious relationship, Joe Mathewson shows that, since the framing of the Constitution, the Supreme Court has needed the press to educate the public about its actions, just as the press has depended on the Supreme Court to ensure the freedoms that give it life. The Court ignored the First Amendment for more than a century and then trampled it, but since the 1960s it has tended to uphold the rights of the press in the face of opposition, that coming from the Executive Branch. Still, the Court has repeatedly failed to fully inform the public of its decisions. Even today the Court permits only limited access to its audio tapes of oral arguments, and it famously refuses to allow television cameras into the courtroom. Mathewson argues that if the Supreme Court wants to maintain its legitimacy and authority in the internet age it must allow broader access for the press.
AUTHOR BIOGRAPHY
Joe Mathewson is a lecturer at Northwestern University’s Medill School of Journalism, a former Supreme Court reporter for the Wall Street Journal, the author of Up Against Daley, and a contributor to the Chicago Tribune, Business Week online, Editor & Publisher online, and the Chicago Sun-Times. He is a graduate of the University of Chicago Law School and has practiced law in Chicago.
REQUEST ACCESSIBLE FILE