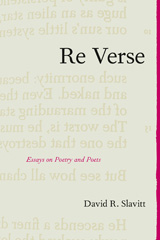 David R. Slavitt will tell you that he does not believe in literary criticism so much as in "remarks," which are more portable and, often, more enlightening. In this witty and unusual work, he remarks upon the life of a poet in the second half of the twentieth century, how it was--and how it is--to be an American writer.

Combining personal reminiscence with deft literary analysis, incisive biographical sketches, and, sometimes, literary gossip, these essays give new perspectives on the famous--such as Harold Bloom, Robert Penn Warren, Robert Frost, and Stephen Spender--and recover the charms of the near-forgotten--such as Dudley Fitts, Winfield Townley Scott, Merrill Moore and John Hall Wheelock. Slavitt writes with self-deprecating humor of his own literary education, and uses his impressive experience and erudition to illuminate the whims of poetic influence, passion, and reputation. With a refreshing honesty and considerable poise, he gives readers an enlightening view of the vast and ever-changing literary universe.
AUTHOR BIOGRAPHY
David R. Slavitt is a poet, novelist, critic, and translator, and has written more than eighty books. His most recent novel is Aspects of the Novel (Catbird Press, 2003) and his new collection of poems is forthcoming from Louisiana State University Press. He is also the translator of The Regrets by Joachim du Bellay (2004) and Sonnets of Love and Death by Jean de Sponde (2001), both published by Northwestern University Press.
REVIEWS

"In Re Verse, David Slavitt offers a warmly personal and sharp-witted record of his engagement with poetry and other poets. Blessedly free of jargon, critical obfuscation or self-inflating theories, his essays expand one's vista well beyond the current myths and heroes of po biz and its Fame Game. We receive the poem, then, in its individual and human setting of family, friends, and the wider society of work and play." -W. D. Snodgrass

EXCERPT
One of the poets Dudley Fitts brought up to Andover in 1951-52 to read and talk to us about his poetry was Merrill Moore, who was probably the least-well-known of the Fugitives. An extraordinary man, he was a psychiatrist and a long-distance swimmer who wrote sonnets, lots of them. In an obituary article John Ciardi wrote, in 1957 that Moore was said to keep a pad on the dashboard of his car and that he had often written a sonnet while waiting for a traffic light to turn green. His big book, which came out in 1938 from Harcourt Brace, was called M: One Thousand Autobiographical Sonnets. Clearly, Fitts and Moore were old friends, for the acknowledgment page includes an expression of "deepest appreciation to John Crowe Ransom, Donald Davidson, Alfred Starr, Dudley Fitts, and Louis Untermeyer," for help in selecting and arranging the manuscript. Having been alerted that Moore was coming, I went to the Oliver Wendell Holmes Library to get hold of a copy of one of his books, but Elizabeth Eades, the academy librarian, a formidable woman with a heavy southern accent, didn't approve of Dr. Moore's candor about sex and had withdrawn the book I wanted - almost certainly Clinical Sonnets -- from general circulation. This meant that I had to go to get a note from Fitts directing her to let me borrow it. I'd had problems with the library before. I'd been thrown out once for laughing out loud, which seemed to me very unfair. Laughter is not always under one's control, after all. And the reference room was almost empty at the time, so that my outburst wasn't so much an actual inconvenience to other scholars as it was a theoretical violation of the propriety and dignity of the library -- which made it all the more important to the academy. What had occasioned my involuntary chortle was my reading of Cross's Shorter History of England in which I learned that "Gladstone's" -- page break, followed on the verso by the rest of the sentence -- "father was a greengrocer." And some wag, in straits as desperate as mine, had written in the margin, in pencil: "Very important! Will appear on exam!" After several hours of catching up on homework I'd deferred for far too long, that struck me with disproportionate force and I laughed. One of the reading room monitors, a white-haired assistant librarian, then came over to the table at which I was working, put her finger before her lips, scowled, and hissed shshsh! which also seemed funny, and I laughed aloud again. This was what got me sent to Dean Benedict's office for a mind-bendingly boring lecture on community spirit, a quality that prep school masters and gulag guards both value. I mention this as a way of suggesting how I was particularly receptive to Dr. Moore's poetry. It was subversive. It, too, had been put under the ban by Elizabeth Eades. Assigned poetry may or may not be attractive to us, but poetry that has been forbidden has an undeniable glamour. It would be pleasant to suppose that Miss Eades was trying to promote our love of literature by keeping it from us - but I have no reason to think so. Andover was a fairly burly, anti-intellectual, even Philistine place, and few of the students were likely to request any of the books that she kept on the closed shelves. Bizarrely enough, the only book I can remember my parents ever objecting to my reading had been Crime and Punishment, which my father thought was too morbid and depressing for a fifteen-year-old boy. (Nabokov detested that novel, too, but for other reasons: he thought it mawkish and sentimental.) I was dismayed, although not surprised, for Andover to be monitoring what books the students were reading and to be affirming the values of decency and propriety over those more challenging and uncomfortable ideals of freedom of inquiry and the right of artists to express themselves.
REQUEST ACCESSIBLE FILE