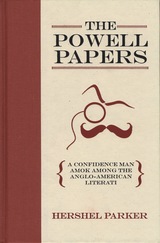 The Powell Papers: A Confidence Man Amok Among the Anglo-American Literati
by Hershel Parker
Northwestern University Press, 2011
Cloth: 978-0-8101-2703-6
In 1849—months before the term “confidence man” was coined to identify a New York crook—Thomas Powell (1809–1887), a spherical, monocled, English poetaster, dramatist, journalist, embezzler, and forger, landed in Manhattan. Powell in London had capped a career of grand theft and literary peccadilloes by feigning a suicide attempt and having himself committed to a madhouse, after which he fled England. He had been an intimate of William Wordsworth, Elizabeth Barrett, Robert Browning, Charles Dickens, and a crowd of lesser literary folk.

Thoughtfully bearing what he presented as a volume of Tennyson with a few trifling revisions in the hand of the poet, Powell was embraced by the slavishly Anglophile New York literary establishment, including a young Herman Melville. In two pot-boilers—The Living Authors of England (1849) and The Living Authors of America (1850)—Powell denounced the most revered American author, Washington Irving, for plagiarism; provoked Charles Dickens to vengeful trans-Atlantic outrage and then panic; and capped his insolence by identified Irving and Melville as the two worst “enemies of the American mind.” For almost four more decades he sniped at Dickens, put words in Melville’s mouth, and survived even the most conscientious efforts to expose him. Long fascinated by this incorrigible rogue, Hershel Parker in The Powell Papers uses a few familiar documents and a mass of freshly discovered material (including a devastating portrait of Powell in a serialized novel) to unfold a captivating tale of skullduggery through the words of great artists and then-admired journalists alike.
AUTHOR BIOGRAPHY
Hershel Parker is the H. Fletcher Brown Professor Emeritus at the University of Delaware. He is co-editor with Harrison Hayford of the landmark Norton Critical Edition of Moby-Dick (1967 and 2001) and Associate General Editor of The Writings of Herman Melville. Parker's landmark 1996 two volume Herman Melville: A Biography is generally regarded as an outstanding exemplar of American literary biography. Parker is an advocate of traditional methods of literary research, which emphasize access to original materials, encourage deliberate study of chronology, and examine the relationship between a literary work and the creative genius of its author.