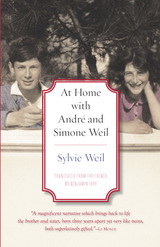 Born into a freethinking Jewish family in France in 1909, Simone Weil was one of the twentieth century’s most original philosophers, influencing Albert Camus, T. S. Eliot, Simone de Beauvoir, Pope John XXIII, Czeslaw Milosz, and Susan Sontag. She fought for workers’ rights and, later, the Spanish Republican cause. Before her death at age thirty-four, Simone Weil turned increasingly to mysticism and religion, especially Roman Catholicism, exploring themes of sacrifice, asceticism, and the virtues of manual labor. She never converted, however, and Sylvie Weil writes from a Jewish perspective, emphasizing Simone’s Jewish heritage.

Using previously unpublished family correspondence and conversations, Sylvie Weil paints the most vivid, private portrait of her aunt in print. The book illuminates Simone’s relationship with others, especially with her brother, André. Loving and unsparing, affectionate and incisive, At Home with André and Simone Weil is an insightful memoir about a family of intellectual luminaries.

SYLVIE WEIL earned degrees in classics and French literature at the Sorbonne. She was a professor of French literature and is the author of several award-winning works of fiction for adults and for young adults, including two novels published in the United States: My Guardian Angel and Elvina’s Mirror.

Prologue
Plato or Diophantus
Phone Call
The Tunnel
A Normal Little Girl
The Saint's Tibia
Living with Her
Where to Find the Sugar Bowl
Who Are We Congratulating Here?
To Baptize Me or Not to Baptize Me?
The Nuns
Gelfilte Fish
A Beauty of Euclid
A Genuine Relic?
Choo-Choo
Do You Want to Come with Me?
A Two-Headed Genius
Family Portrait
Sterling Ancestors: From the Galician Side
Sterling Ancestors: From the Alsatian Side
The Wages of Sin
A Family Unglued
The Metamorphoses of a Kuckucksei
These Ruined Faces
The Garde-Meuble
Jerusalem
A Navy Blue Beret
Indestructible?
Japonaiserie
Pulling the Wool over Her Eyes
Tzedakah
The Old Horse
Visitation Rights
Revelation
Roots The Mirror's Eyes
Pale Petals
Epilogue