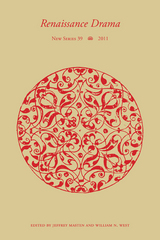 Renaissance Drama 39
edited by Jeffrey Masten and William N. West
Northwestern University Press, 2011
eISBN: 978-0-8101-6529-8
Cloth: 978-0-8101-2738-8
Renaissance Drama, an annual and interdisciplinary publication, is devoted to drama and performance as a central feature of Renaissance culture. The essays in each volume explore traditional canons of drama, the significance of performance (broadly construed) to early modern culture, and the impact of new forms of interpretation on the study of Renaissance plays, theater, and performance.

AUTHOR BIOGRAPHY
William N. West is an associate professor of English, classics, and comparative literary studies at
Northwestern University. He is the author of Theatres and Encyclopedias in Early Modern Europe
(2002). He is currently at work on a book called Understanding and Confusion in the Elizabethan
Theaters and on a project that traces the history of the idea of the Renaissance as a period.