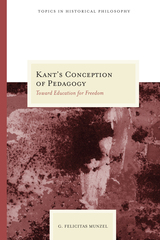 "In Kant’s Conception of Pedagogy Felicitas Munzel offers an impressive articulation and defense of Kant’s account of the necessary (inner) conditions for human freedom and specifies what the attainment of these conditions mean for education. . . . Munzel’s work here is to be celebrated both for its ambitious scope and the incisiveness with which it hones in on questions that are central for Kant scholarship in particular and educational philosophy in general." —CChristopher Martin, The University of British Columbia

"Munzel’s engagement with questions about human nature, self-knowledge and the sort of people we ought to be, makes her scholarship profoundly significant for our field." ?—Megan J. Laverty, author of Iris Murdoch's Ethics: A Consideration of her Romantic Vision