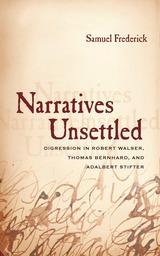 In Narratives Unsettled, Samuel Frederick proposes a new conception of narrativity that can accommodate unwieldy forms of digression. By way of close readings of three German-language writers from different historical periods, Frederick demonstrates that digression, far from being a non- or anti-narrative interruption, contributes to what makes these writers' works fundamentally narrative. In the process, the author counters several foundational assumptions of classical narratology, including the conviction—rooted in Aristotle—that narrative without plot is logically impossible, and that anything deviating from narrative's teleological imperative is either destructive or insignificant.

Frederick's readings of the narrative experiments, utopian moments, and obsessions with the trivial in works by Walser, Bernhard, and Stifter point to new ways of approaching the ostensibly antinarrative as a productive element of narrativity. As a work that explores the often neglected crossroads of German studies and postclassical narratology, Narratives Unsettled will be of great interest to scholars in both of these fields, as well as to those working on literature and theory in general.
AUTHOR BIOGRAPHY
SAMUEL FREDERICK is an associate professor of German at the Pennsylvania State University.
REVIEWS
"In modest yet poignant and lucid fashion Narratives Unsettled sets out to unsettle one of the most profound narratological distinctions since Aristotle's Poetics: the subservience of narrative to plot. The author has elegantly succeeded in a rather difficult task: to integrate two separate fields of research in such a way that both scholars and students of German studies, and a wider audience interested in problems and current trends in narratology will equally profit from it. This is a very original and far-reaching book, superbly organized and extremely well written." —Eva Geulen, author of The End of Art: Readings in a Rumor after Hegel

Digressivity, Madness, and the Infinite Continuum in Thomas Bernhard’s Verstörung