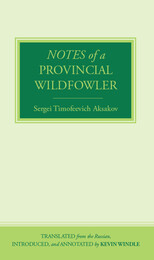 One of nineteenth-century Russia's finest prose writers, Sergei Timofeevich Aksakov's Notes of a Provincial Wildfowler is companion to his popular Notes on Fishing and a classic of nature writing.

Notes of a Provincial Wildfowler is filled with precise descriptions of bird behavior, observations of their life cycles, and lyrical discourses on the habitats of the Russian steppe. Aksakov's nostalgic fondness for his homeland permeates his Notes, and his passion for the habits of his subjects provides a stark contrast with his enthusiasm for the shooting--and eating--of his quarry.
AUTHOR BIOGRAPHY
Sergei Timofeevich Aksakov (1791-1859) is considered one of nineteenth-century Russia's finest prose stylists; he is best knwn outside of Russia for his great autobiographical trilogy: A Family Chronicle, Childhood Years of a Bagrov Grandson, and Memoirs. Aksakov's Notes on Fishing is also published by Northwestern University Press.

Kevin Windle is a professor in the Department of Modern European Languages at the Australian National University.
TABLE OF CONTENTS