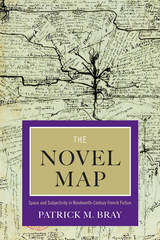 Focusing on Stendhal, Gérard de Nerval, George Sand, Émile Zola, and Marcel Proust, The Novel Map: Mapping the Self in Nineteenth-Century French Fiction explores the ways that these writers represent and negotiate the relationship between the self and the world as a function of space in a novel turned map.

With the rise of the novel and of autobiography, the literary and cultural contexts of nineteenth-century France reconfigured both the ways literature could represent subjects and the ways subjects related to space. In the first-person works of these authors, maps situate the narrator within the imaginary space of the novel. Yet the time inherent in the text’s narrative unsettles the spatial self drawn by the maps and so creates a novel self, one which is both new and literary. The novel self transcends the rigid confines of a map. In this significant study, Patrick M. Bray charts a new direction in critical theory.

Patrick M. Bray isan assistant professor in the Department of French and Italian at the Ohio State University.


Table of ContentsList of Illustrations 3Acknowledgments 5Introduction – Here and There: The Subject in Space and Text 8 Section I. Stendhal’s Privilege 28 Chapter 1 – The Life and Death of Henry Brulard 34 Chapter 2 – The Ghost in the Map 56Section II. Nerval Beyond Narrative 82 Chapter 3 – Orientations: Writing the Self in Nerval’s Voyage en Orient 85 Chapter 4 – Unfolding Nerval 110Section III. Sand’s Utopian Subjects 139 Chapter 5 – Drowning in the Text: Space and Indiana 143 Chapter 6 – Carte blanche: Charting Utopia in Sand’s Nanon 166Section IV. Branching Off: Genealogy and Map in the Rougon-Macquart 189 Chapter 7 – Zola and the Contradictory Origins of the Novel 193 Chapter 8 – Mapping Creative Destruction in Zola 216Section V. Proust’s Double Text 239 Chapter 9 – The Law of the Land 242 Chapter 10 – Creating a Space for Time 270 Conclusion – Now and Then: Virtual Spaces and Real Subjects in the 21st-Century 290Works Cited 293End Notes 304Index 340