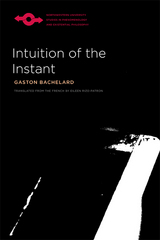 Appearing in English for the first time, Intuition of the Instant—Bachelard’s first metaphysical meditation on time and its moral implications—was written in 1932 in the wake of Husserl’s lectures on streaming time-consciousness, Heidegger’s Being and Time, and Henri Bergson’s philosophy of the élan vital. A culmination of Bachelard’s earlier studies in scientific epistemology, this work builds the epistemic framework that would lead theorists of all stripes to advance knowledge by breaking with accepted modes of thought. Intuition of the Instant sows the seeds of Bachelard’s future poetics, most notably in the essay “Poetic Instant and Metaphysical Instant” (1939)—included in this volume, along with an excerpt from Jean Lescure’s lecture “Introduction to Bachelard’s Poetics” (1966). Eileen Rizo-Patron’s translation offers a key to Bachelard’s subsequent works on science, time, and imagination, which remain epistemological touchstones.

AUTHOR BIOGRAPHY
Gaston Bachelard (1884–1962) began his teaching career in 1919 as professor of physics and chemistry at the Collège de Bar-sur-Aube. In 1927, Bachelard earned his doctorate in letters at the Sorbonne, specializing in epistemology.  In 1930 he was appointed professor of philosophy at the University of Dijon, where he taught until 1940, at which time he was named chair of history and philosophy of science at the Sorbonne (1940–1954).  In 1961 he won the French Grand Prix National des Lettres for his widely acclaimed The Poetics of Space (La poétique de l’espace, 1957).


Eileen Rizo-Patron edited Traversing the Heart: Journeys of the Inter-religious Imagination (2010) with Richard Kearney. She is currently a research associate at State University of New York, Binghamton’s Center for Interdisciplinary Studies in Philosophy, Interpretation, and Culture.

CHAPTER ONE: The Instant

CHAPTER TWO: The Problem of Habit and Discontinuous Time

CHAPTER THREE: The Idea of Progress and the Intuition of Discontinuous Time

An excerpt from "Introduction to Bachelard’s Poetics" (1966), by Jean Lescure