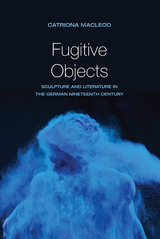 In Fugitive Objects, Catriona MacLeod examines the question of why sculpture is both intensively discussed and yet rendered immaterial in German literature. She focuses on three forms of disappearance: sculpture’s vanishing as a legitimate art form at the beginning of the nineteenth century in German aesthetics, statues’ migration from the domain of high art into mass reproduction and popular culture, and sculpture’s dislodging and relocation into literary discourse. Through original readings of Clemens Brentano, Achim von Arnim, Adalbert Stifter, Leopold von Sacher-Masoch, and others, MacLeod reveals that if sculpture has disappeared from much of nineteenth-century German literature and aesthetics, it is a vanishing act that paradoxically relocates the statue back onto another cultural pedestal, attesting to the powerful force of the medium.

Catriona MacLeod is a professor in the Department of Germanic Languages and Literatures at the University of Pennsylvania.