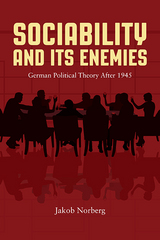 Sociability and Its Enemies contributes both to contemporary studies of political theory and to discourse on postwar Germany by reconstructing the arguments concerning the nature and value of sociability as a form of interaction and interconnection particular to modern bourgeois society. Jakob Norberg argues that the writings of Hannah Arendt, Jürgen Habermas, Carl Schmitt, and the historian Reinhart Koselleck present conflicting responses to a hitherto neglected question or point of contention: whether bourgeois sociability should serve as a therapeutic practice and politically relevant ideal for postwar Germany. The book sheds light on previously neglected historical and conceptual connections among political theorists, and it enriches established narratives of postwar intellectual history.
AUTHOR BIOGRAPHY
Jakob Norberg is Andrew W. Mellon Assistant Professor of German at Duke University.
REQUEST ACCESSIBLE FILE