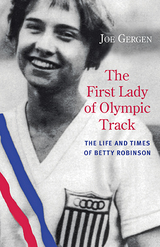 The 1928 Olympic Games in Amsterdam were the first in which women—over the objections of many, including Pope Pius XI and the founder of the modern Olympics, Baron Pierre de Coubertin—were allowed to run in the marquee track events.

Equally remarkable is the story behind the first female gold medal winner in the 100-meter dash, sixteen-year-old American Betty Robinson. A prodigy running in just her fourth organized meet, Robinson stunned the world, earning special praise from the president of the 1928 American Olympic Committee, General Douglas MacArthur. But Robinson’s triumph soon became tragedy when in 1931 she was involved in a life-threatening plane crash. Unable to assume a sprinter’s crouch, she nevertheless joined fellow pioneer Jesse Owens at the infamous 1936 Berlin Olympics, and achieved further glory on the relay team. Journalist Joe Gergen’s The First Lady of Olympic Track rescues an exceptional figure from obscurity.

JOE GERGEN was a sports writer and columnist for Newsday for forty years. He also has written for numerous other publications, including Sporting News, Sports Illustrated, and New York magazine. His previous books include The Final Four (1987) and, with Ralph Kiner, Kiner’s Korner (1987).