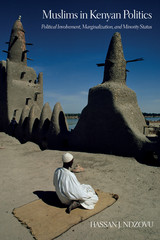 Muslims in Kenyan Politics explores the changing relationship between Muslims and the state in Kenya from precolonial times to the present, culminating in the radicalization of a section of the Muslim population in recent decades. The politicization of Islam in Kenya is deeply connected with the sense of marginalization that shapes Muslims’ understanding of Kenyan politics and government policies.

Kenya’s Muslim population comprises ethnic Arabs, Indians, and black Africans, and its status has varied historically. Under British rule, an imposed racial hierarchy affected Muslims particularly, thwarting the development of a united political voice. Drawing on a broad range of interviews and historical research, Ndzovu presents a nuanced picture of political associations during the postcolonial period and explores the role of Kenyan Muslims as political actors.

Hassan J. Ndzovuis a lecturer at Moi University in Kenya.

Chapter Two
Historical Evolution of Muslim Politics in Kenya: From 1840s to 1963
Religio-Political Relation in Pre-Colonial and Colonial Times…………….23
The Fate of Muslims after the British Occupation at the Coast……..40
The Arab Factor in the Muslims Collaboration with Colonial Administration…..42
Muslims Response to Representation in the Legislative Council……54
Coastal Muslims’ Secession Agenda and the Politics of a Unitary….61
Pan-Somalia State and Kenyan Somalis Secession Program……….74
Chapter Three
Postcolonial Kenya’s Attitude toward Religion and Muslims Predicament
Religio-Political Relation in the Postcolonial Period…………..79
The Kenyatta’s Era and the Indifferent Role of Religion in Politics……..83
The Evangelical Churches Support of Moi’s Leadership……….85
The Cross and the Crown Duel in Constitution Making in the Kibaki Presidency…..90
Shifting Fortunes of Muslims in Kenya’s Changing Politics…………100
Muslims under the Kenyatta Regime…………103
Muslims under the Moi Regime…….109

Chapter Four
Development of Muslims Civic Associations and Political Parties
The Creation of SUPKEM and the Need to Unify Muslims Efforts..........118
The ‘Failure’ of SUKEM in the Political Arena………122
Muslims Political Opposition from 1990s through an Islamic Party..……128
Toward the Politicization of Islam in Kenya: The Local Factor……134
Ethnicized Muslims and the Future of the Islamic Party politics in Kenya.……139
In Search of a Political Platform: The Transformation of Ulama………145

Chapter Five
Legislative, Judicial and Constitutional Arena of Muslims Politics
The Equality Bill 2002: Women Emancipation in Kenya………154
Polygynous Marriage in Islam……158
Divorce by Repudiation……160
The Law of Succession……162
The Suppression of Terrorism Bill, 2003: Legislating Against Terrorism……164
Challenges of International Terrorism in Kenya……169
Al-Shabaab’s Challenge to the Kenyan Security……173
The War on Terror and Growing Anti-Americanism among Kenyan Muslims……177
The ‘Wanjiku Constitution’ and the Politics of the Kadhi Courts……180
To Entrench or Retrench the Kadhi Courts?........182
The High Court’s Verdict on the Legality of the Kadhi Courts......190