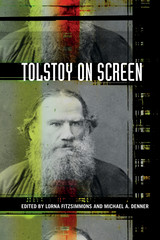 Scholarship on screen adaptation has proliferated in recent years, but it has remained largely focused on English- and Romance-language authors. Tolstoy on Screen aims to correct this imbalance with a comprehensive examination of film and television adaptations of Tolstoy’s fiction. Spanning the silent era to the present day, these essays consider well-known as well as neglected works in light of contemporary adaptation and media theory. The book is organized to facilitate a comparative, cross-cultural understanding of the various practices employed in different eras and different countries to bring Tolstoy’s writing to the screen. International in scope and rigorous in analysis, the essays cast new light on Tolstoy’s work and media studies alike.

MICHAEL A. DENNER is an associate professor of Russian studies at Stetson University in Florida and the editor of Tolstoy Studies Journal.

3   Beyond the Melodrama of Kachusha-mono: Mizoguchi’s Straits of Love and Hate (Aien kyo,
1937)
RIE KARATSU

5   When We Dead Awaken: A Living Corpse as a Moving Picture
WILLIAM NICKELL

6    Natasha at the Opera: Cinematic Treatments of Performance
in Tolstoy’s War and Peace
SHARON MARIE CARNICKE

VI “The Death of Ivan Il’ich”

AMY MANDELKER
VII “A Prisoner of the Caucasus”

11 Inverting the Imperial Dyad:
Post-Soviet Screen Adaptations of Tolstoy’s “A Prisoner of the Caucasus”
VLAD STRUKOV AND SARAH HUDSPITH