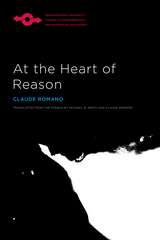 At the Heart of Reason
by Claude Romano
translated by Michael B. Smith
edited by Anthony J. Steinbock

In At the Heart of Reason, Claude Romano boldly calls for a reformulation of the phenomenological project. He contends that the main concern of phenomenology, and its originality with respect to other philosophical movements of the last century, such as logical empiricism, the grammatical philosophy of Wittgenstein, and varieties of neo-Kantianism, was to provide a "new image of Reason."

Against the common view, which restricts the range of reason to logic and truth-theory alone, Romano advocates "big-hearted rationality," including in it what is only ostensibly its opposite, that is, sensibility, and locating in sensibility itself the roots of the categorical forms of thought. Contrary to what was claimed by the "linguistic turn," language is not a self-enclosed domain; it cannot be conceived in its specificity unless it is led back to its origin in the pre-predicative or pre-linguistic structures of experience itself.

CLAUDE ROMANO teaches at the University of Paris-Sorbonne and Australian Catholic University.   . His most recent works translated into English are Event and Time (2013) and Event and World (2009).

MICHAEL B. SMITH is a professor emeritus of French and philosophy at Berry College in Georgia; he has translated numerous philosophical works into English.