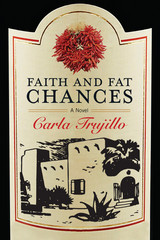 Carla Trujillo brings to life another side of the fabled city of Santa Fe in this rollicking novel set in Dogtown, a dilapidated neighborhood on the outskirts of town. Home to a hardscrabble community of working people struggling to make a living on meager means, Dogtown is worlds apart from the tourists, artists, and upscale eateries just a stone’s throw away. The close-knit neighborhood thrives in its own way, until an entrepreneur arrives with a plan to cast out its occupants and construct a winery in its place.

Led by Dogtown’s unofficial mayor, Pepa Romero—an irreverent healer with old-world wisdom and new-age knowledge—the citizens of Dogtown revolt. Using everything at their disposal, including spying, supernatural powers, the law, and individual cunning, they set in motion a thrilling and at times hilarious chain of events that culminates in a storm of epic proportions. With an unforgettable cast of characters, Faith and Fat Chances illuminates the ingenuity and resilience of people fighting to preserve their way of life.