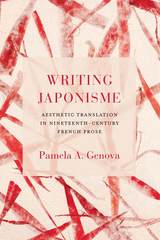 Winner of the SCMLA 2017 Book Award

Identifying a general critical move from a literal to a more metaphoric understanding and presentation of Japonisme, Pamela A. Genova applies a theory of "aesthetic translation" to a broad response to Japanese aesthetics within French culture. She crosses the borders of genre, field, and form to explore the relationship of Japanese visual art to French prose writing of the mid- to late 1800s. Writing Japonisme focuses on the work of Edmond de Goncourt, Joris-Karl Huysmans, Émile Zola, and Stéphane Mallarmé as they witnessed, incorporated, and participated in an unprecedented cultural exchange between France and Japan, as both creators and critics. Genova’s original research opens new perspectives on a fertile and influential period of intercultural dynamics.