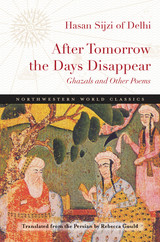 Translated from the Persian by Rebecca Gould

Hasan Sijzi, also known as Amir Hasan Sijzi Dehlavi, is considered the originator of the Indo-Persian ghazal, a poetic form that endures to this day—from the legacy of Hasan’s poetic descendent, Hafez, to contemporary Anglophone poets such as John Hollander, Maxine Kumin, Agha Shahid Ali, and W. S. Merwin.

As with other Persian poets, Hasan worked within a highly regulated set of poetic conventions that brought into relief the interpenetration of apparent opposites—metaphysical and material, mysterious and quotidian, death and desire, sacred and profane, fleeting time and eternity. Within these strictures, he crafted a poetics that blended Sufi Islam with non-Muslim Indic traditions. Of the Persian poets practiced the ghazal, Hafez and Rumi are best known to Western readers, but their verse represents only a small fraction of a rich tradition. This collection reveals the geographical range of the literature while introducing an Indian voice that will find a place on reader’s bookshelves alongside better known Iranian names.

AUTHOR BIOGRAPHY
HASAN SIJZI OF DELHI (1254–c. 1328) was a key figure in the development of Indo-Persian literary culture and its poetic forms following the Mongol invasions of the thirteenth century. He began writing poetry at the age of thirteen.

REBECCA GOULD is a reader in comparative literature and translation studies in the School of Modern Languages at the University of Bristol.