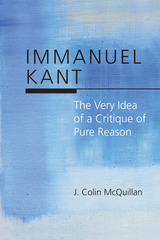 Immanuel Kant: The Very Idea of a Critique of Pure Reason is a study of the background, development, exposition, and justification of Kant's Critique of Pure Reason. Instead of examining Kant's arguments for the transcendental ideality of space and time, his deduction of the pure concepts of the understanding, or his account of the dialectic of human reason, J. Colin McQuillan focuses on Kant's conception of critique. By surveying the different ways the concept of critique was used during the eighteenth century, the relationship between Kant's critique and his pre-critical experiments with different approaches to metaphysics, the varying definitions of a critique of pure reason Kant offers in the prefaces and introductions to the first Critique, and the way Kant responds to objections, McQuillan is able to highlight an aspect of Kant's critical philosophy that is too often overlooked—the reason that philosophy is critical.
AUTHOR BIOGRAPHY
J. COLIN McQUILLAN is an assistant professor of philosophy at St. Mary’s University in San Antonio, Texas.
TABLE OF CONTENTS