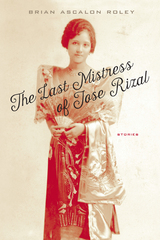 The Last Mistress of Jose Rizal is a collection of stories that focuses on multigenerational tales of intertwined Filipino families. Set in the huge yet relatively overlooked and misunderstood Filipino diaspora in the United States, this book follows characters who live in the shadow of the histories of the United States and its former colony in Asia, the Philippines. The impact of immigration and separation filters through the stories as a way of communing with or creating distance between individuals and family, country, or history.

Roley’s work has been praised by everyone from New York Times literary critics to APIA author Helen Zia for his bare, poetic style and raw emotionalism. In the collection’s title story, a woman living with her daughter and her daughter’s American husband fears the loss of Filipino tradition, especially Catholicism, as she tries to secretly permeate her granddaughter’s existence with elements of her ancestry. In "New Relations," an American-born son introduces his mother to his Caucasian bride and her family, only to experience his first marital discord around issues of politesse, the perception of culture, and post-colonial legacies. Roley’s delicately nuanced collection often leaves the audience with the awkwardness that comes from things lost in translation or entangled in generational divides.

AUTHOR BIOGRAPHY
BRIAN ASCALON ROLEY is the author of the award-winning novel American Son (2001), which was a Los Angeles Times Best Book, New York Times Notable Book, Kiriyama Prize finalist, and winner of the 2003 Association of Asian American Studies Prose Book Award, among other honors. He is an English professor at Miami University of Ohio.
TABLE OF CONTENTS

THE LAST MISTRESS OF JOSE RIZAL

FOR LUNCH AT A FILIPINO RESTAURANT WE GO TO KOREATOWN