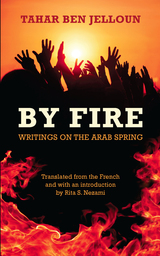 Tahar Ben Jelloun’s By Fire, the first fictional account published on the Arab Spring, reimagines the true-life self-immolation of Mohamed Bouazizi in Tunisia, an event that has been credited with setting off the Tunisian revolt. The novella depicts the days leading up to Bouazizi’s self-immolation. Ben Jelloun’s deliberate ambiguity about the location of the story, set in an unnamed Islamic country, allows the reader to imagine the experiences and frustrations of other young men who have endured physical violence and persecution in places beyond Tunisia. The tale begins and ends in fire, and the imagery of burning frames the political accounts in The Spark, Ben Jelloun’s nonfiction writings on the Tunisian events that provide insight into the despotic regimes that drove Bouazizi to such despair. Rita S. Nezami’s elegant translations and critical introduction provide the reader with multiple strategies for approaching these potent texts.

AUTHOR BIOGRAPHY
TAHAR BEN JELLOUN is a well-known Moroccan intellectual who writes almost exclusively in French. As a teenager, Ben Jelloun spent time in a Moroccan army camp after his arrest for demonstrating. He sought exile in Paris in the 1960s and has since become one of France’s most celebrated authors. He was awarded the Prix Goncourt in 1987 for The Sacred Night and the Impac Award in 2004 for This Blinding Absence of Light. Ben Jelloun has written two educational books for children: Racism Explained to My Daughter (1998) and Islam Explained to the Children and Their Parents (2002). His latest book, The Islam That Scares, has been published in several countries.

RITA S. NEZAMI teaches in the Writing and Rhetoric Program at SUNY–Stony Brook, where she focuses on global issues, visual rhetoric, the personal essay, and postcolonial Anglophone and Francophone literatures.

The New Tunisian Constitution is Revolutionary