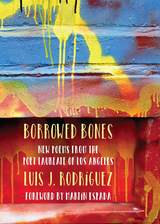 This chapbook collection offers new poems from the prolific career of a community leader, activist, and healer. Luis J. Rodríguez’s work asks profound questions of us as readers and fellow humans, such as, "If society cooperates, can we nurture the full / and healthy development of everyone?" In his introductory remarks, Martín Espada describes the poet as a man engaged in people and places: "Luis Rodríguez is a poet of many tongues, befitting a city of many tongues. He speaks English, Spanish, ‘Hip Hop,’ ‘the Blues,’ and ‘cool jazz.’ He speaks in ‘mad solos.’ He speaks in ‘People’s Sonnets.’ He speaks in the language of protest. He speaks in the language of praise."

MARTÍN ESPADA was born in Brooklyn in 1957. Called the Latino poet of his generation, he has published more than fifteen books as a poet, editor, essayist, and translator. Espada is currently a professor in the Department of English at the University of Massachusetts–Amherst.

Words
Heavy Blue Veins: Watts 1959
Making Medicine
Moonlight to Water
Fevered Shapes
Dance or Die
Perhaps
Machu Picchu – or what I should have become when the ancient stone walls and the clouded heights named my blood
A Hungry Song in the Shadows
When a poet appears…
Three Love Poems for Trini
An observation
Love Poem to Los Angeles
People’s Sonnets