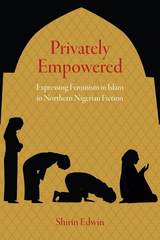 Privately Empowered responds to the lack of adequate attention paid to Islam in Africa in comparison to Islam in the Middle East and the Arab world. Shirin Edwin points to the tight embrace between Islam and politics that has rendered Islamic feminist discourse historically and thematically contextualized in regions where Islamic feminism evolves in tandem with the nation-state and is commonly understood in terms of activism, social affiliations, or struggles for legal reform. In Africa itself, Islam bears the burden of being a “foreign” presence that is considered injurious to African Muslim women’s success. Edwin examines the fictional works of the northern Nigerian novelists Zaynab Alkali, Abubakar Gimba, and Hauwa Ali due to the texts’ emphases on personal and private engagement, Islamic ritual and prayer in the quotidian, and observance of Qur’anic injunctions. Analysis of these texts connects the ways in which Muslim women in northern Nigeria balance their spiritual habits in ever changing configurations of their personal and private domains. The spiritual universe of African Muslim women may be one where Islam is not the source of their problems or their legislative and political activity, but a spiritual activity that can exist devoid of activist or political forms.
AUTHOR BIOGRAPHY
SHIRIN EDWIN is an associate professor of French in the Department of Foreign Languages at Sam Houston State University in Huntsville, Texas.
TABLE OF CONTENTS