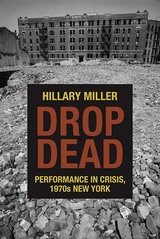 Hillary Miller’s Drop Dead: Performance in Crisis, 1970s New York offers a fascinating and comprehensive exploration of how the city’s financial crisis shaped theater and performance practices in this turbulent decade and beyond.

New York City’s performing arts community suffered greatly from a severe reduction in grants in the mid-1970s. A scholar and playwright, Miller skillfully synthesizes economics, urban planning, tourism, and immigration to create a map of the interconnected urban landscape and to contextualize the struggle for resources. She reviews how numerous theater professionals, including Ellen Stewart of La MaMa E.T.C. and Julie Bovasso, Vinnette Carroll, and Joseph Papp of The Public Theater, developed innovative responses to survive the crisis.

Combining theater history and close readings of productions, each of Miller’s chapters is a case study focusing on a company, a production, or an element of New York’s theater infrastructure. Her expansive survey visits Broadway, Off-, Off-Off-, Coney Island, the Brooklyn Academy of Music, community theater, and other locations to bring into focus the large-scale changes wrought by the financial realignments of the day.

Nuanced, multifaceted, and engaging, Miller’s lively account of the financial crisis and resulting transformation of the performing arts community offers an essential chronicle of the decade and demonstrates its importance in understanding our present moment.