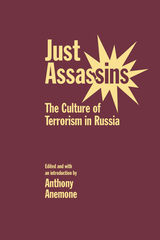 Just Assassins is an engrossing collection of fourteen original essays that illuminate terrorism as it has occurred in Russian culture past and present. The broad range of writers and scholars have contributed work that examines Russian literature, film, and theater; historical narrative; and even amateur memoir, songs, and poetry posted on the Internet. Along with editor Anthony Anemone’s introduction, these essays chart the evolution of modern political terrorism in Russia, from the Decembrist uprising to the horrific school siege in Beslan in 2004.

As terrorism and the fear of terrorism continues to animate, shape, and deform public policy and international relations across the globe, Just Assassins brings into focus how Russia’s cultural engagement with its legacy of terrorism offers instructive lessons and insights for anyone concerned about political terror.

AUTHOR BIOGRAPHY
Anthony Anemone is an associate professor of Russian at the New School in New York City. A literary historian, translator, and film critic who writes about modern Russian literature and cinema, he is the recipient of fellowships from the Kennan Institute for Advanced Russian Studies, the International Research and Exchanges Board, and the Fulbright Program.

Historical Models of Terror in Decemberist Literature
Ludmilla A. Trigos

All of a Sudden: Dostoevsky's Demonologies of Terror
Val Vinokur

The Spiridonova Case, 1906: Terror, Myth, and Martyrdom
Sally A. Boniece

Exile's Vengeance: Trotsky and the Morality of Terrorism
Martin A. Miller

The Afterlife of Terrorists: Commemorating the People's Will in Early Soviet Russia
James Frank Goodwin

"Everyone Here Was Carrying Out Orders": Songs of War and Terror in Chechnya
Anna Brodsky