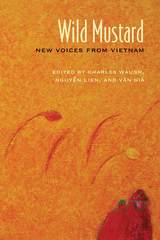 Wild Mustard, an anthology of prizewinning short fiction by contemporary Vietnamese writers, throws into relief the transformations of self and place that followed Vietnam’s turn toward a market economy. In just three decades, since the 1986 policy known as doi moi (renovation) ended collectivization and integrated Vietnam into world markets, the country has transformed from one of the poorest and most isolated on earth into a dynamic global economy. The nineteen stories in this volume capture the kaleidoscopic experiences of Vietnam's youth, navigating between home and newly expanded horizons, as they seek new opportunities through migration, education, and integration not only into their nation but into the world.

In the tradition of the "Under 40" collections popularized by magazines such as the New Yorker and Granta, but with greater stakes and greater differences between the previous generation of writers and this new one, Wild Mustard seeks to change how North American readers think of Vietnam. Escaping the common fixation on the Vietnam War and its aftermath, these stories reflect the movement and dynamism of the young Vietnamese who locate themselves amid the transnational encounters and proliferating identities of a global economy.
AUTHOR BIOGRAPHY
CHARLES WAUGH is an associate professor of English at Utah State University. In 2012, he received a fellowship from the National Endowment for the Arts for his work in literary translation, which led to the compilation of this anthology. With Nguyen Lien he is the coeditor and cotranslator of Family of Fallen Leaves: Stories of Agent Orange by Vietnamese Writers (2010).

NGUYEN LIEN was a writer, translator, scholar, and teacher who championed world literature in translation for nearly fifty years. He translated many international works of literature into Vietnamese, including Tennessee Williams’s The Glass Menagerie and Pat Conroy's The Prince of Tides, as well as the textbook A Contemporary Approach to American Culture. With Charles Waugh he is the coeditor and cotranslator of Family of Fallen Leaves: Stories of Agent Orange from Vietnamese Writers (2010).

VAN GIA is the dean of the Faculty of Creative Writing at the University of Culture in Hanoi A professional journalist as well as a beloved teacher, he is a prolific author of literary reviews and nonfiction essays.
TABLE OF CONTENTS

Blown by the Wind: anIntroduction to Wild Mustard • 5
Charles Waugh