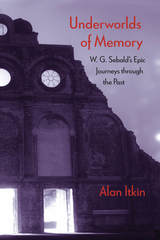 Underworlds of Memory argues persuasively that the literary works of the expatriate German author W. G. Sebald can best be understood through the lens of the classical genre of epic.

Scholars often read Sebald’s work as a project of cultural memory that aims to reevaluate Europe's past in the wake of the traumatic and complex events of the twentieth century. Sebald’s characters seek out the traces of Europe’s destructive history in strange places. They linger in disused train stations, pause before works of art, and return to childhood homes that turn out to be more foreign than any place they have visited. Underworlds of Memory demonstrates that these strange encounters with the past are based on central tropes of classical epic: the journey to the underworld, the encounter with a work of art, and the return to the homeland.

Sebald thus follows in the footsteps of German Jewish authors, including Peter Weiss, Siegfried Kracauer, and Jean Améry, who use these same epic tropes to reconsider the cultural memory of the Holocaust. Underworlds of Memory reads Sebald's works together with the works of these German Jewish authors and the classical epics of Homer and Virgil in order to describe and trace the origins of the unique intervention into cultural memory they embody.
AUTHOR BIOGRAPHY
ALAN ITKIN is a senior lecturer in German at Vanderbilt University.
TABLE OF CONTENTS