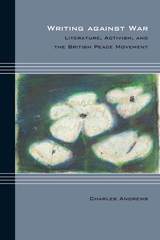 The cataclysm of the First World War gave rise to the British Peace Movement, a spectrum of pacifist, internationalist, and antiwar organizations and individuals. Antiwar sentiments found expression not only in editorials, criticism, and journalism but also in novels and other works of literature. Writing against War examines the work of Aldous Huxley, Storm Jameson, Siegfried Sassoon, Rose Macaulay, and Virginia Woolf to analyze the effects of their attempts to employ fiction in the service of peace activism. It further traces how Huxley, Woolf, and others sought to reconcile their antiwar beliefs with implacable military violence.

The British Peace Movement's failure to halt the rise of fascism and the Second World War continues to cast a shadow over contemporary pacifist movements. Writing about War will fascinate scholars of peace studies and literature and offers valuable insights for current-day peace activists and artists who seek to integrate creativity with activism.
AUTHOR BIOGRAPHY
CHARLES ANDREWS is an associate professor of English at Whitworth University.
TABLE OF CONTENTS

Chapter One
Pledging Peace in Aldous Huxley’s Eyeless in Gaza